How To Not Get Killed on the Street

Reprinted by permission from "Center for Smarter Living"

Street crime is on the increase in most large U.S. cities. It is also becoming more prevalent in small communities.

But you can choose not to become a victim. What you do and how you do it has a great deal to do with whether or not you ever find yourself examining the barrel of a gun close up.

Statistics show that the single best predictor of whether or not you will be mugged is whether or not you have been mugged before. In other words, most victims -- through no fault of their own except ignorance-- invite attack. They send out signals that they are easy targets, and, believe me, there are many human predators out there who can read these signals quite well. They are looking for passive victims, easily intimidated souls who can be counted upon to create very little trouble.

There are a few simple rules to follow that make it very unlikely that you will be victimized.

First, be alert. Be aware of your environment and who is in it. You don't have to be paranoid and fearful, but you do need to be alert to the first signs of danger.

For example, I was in a marginal part of a major city one afternoon with few people on the street when I noticed about a block away a group of about ten young males walking in my direction.

I also noticed when they noticed me. There was a subtle but unmistakable change in their demeanor. Before, they had been ambling along casually. Suddenly, the chatter ceased and they seemed somehow intent on my presence.

What would you do?

I started jogging towards them. As I got close to them, I smiled and nodded.

Two of them stepped out into my path. One of them held his right hand inside his jacket.

"Sorry!" I said, and picked up my pace slightly, running around them . I'm meeting that policeman." Note that by jogging towards before the encounter, I established my speed. By merely increasing my speed when they accosted me, I minimized my contact with them, denied them any leisurely opportunity to assess me as a potential victim. And I did not invite pursuit by having to break into a run from a standstill. The encounter was over before it began.

Now maybe these were fine young men on their way back from Bible study who just wanted to share the good news with me. But my intuition told me it wasn't a religious pamphlet that one young man was holding inside his jacket.

This leads me to the second lesson of street survival. Respect your own intuition. If something is sounding your internal alarm, respect it and act on it. You are wiser than you think. You notice things subconsciously about other people. Do not dismiss these feelings.

Have you ever gained anything significant from an interaction with a stranger on the street? I have not. Those who know and love me have been the major sources of help in my life.

You have no obligation to interact with strangers. I am not advocating being rude or impolite-- unless you sense good reason to be afraid. But if your inner alarm bell is ringing, do not stand there giving someone directions. And he can find out what time it is from someone else and you don't have to stop and let him know that you have a wrist watch worth stealing.

Be alert for loiterers and do not interact with them.

There are some obvious other small rules. Don't carry large sums of money in your wallet, if you're a man, or a purse, if you're a woman.

If possible, stay out of bad parts of town and if you have to, travel with another person. This is especially true after dark.

It's important to not carry anything valuable in your purse. This way you don't care so much if some jerk grabs it. Don't wave your purse around just inviting someone to grab it from you. But don't fight to keep it either.

Don't wrap the strap around your shoulder, neck or wrist. And you don't want a good stout strap either, but one that will break easily. If your purse is grabbed, a strong strap will not yield easily and you may be injured. Some victims of purse snatchers have been thrown off balance, fallen, and received concussions, broken hips, ankles or legs.

If you're in a dangerous area, either alone in a place you shouldn't be in the first place or in the middle of a big crowd, hold the purse under your arm with a firm grip on it. But if someone tries to take it away from you, give it up.

Look at it this way. Anyone who wants to grab your purse and run away as fast as possible should not be discouraged from doing so. They're not people you want hanging around, anyway. Scream good and loud in hopes that some brave soul will trip the guy.

Better you lose some money and credit cards, than that you should go to the hospital.

The best place to carry such things is in a fanny pack with the pouch in front like a kangaroo momma. Or carry them in a coat or sweater pocket or concealed on your person to reduce the opportunity of large losses.

Don't carry anything more valuable than you can afford to lose. Always leave all unnecessary credit cards at home. When you shop and carry a purse, put it in your shopping bag.

Never hitchhike or accept rides from strangers. Believe it or not, the majority of women who are raped by strangers were hitchhiking at the time.

Walk on the side of the street nearest to oncoming traffic. If accosted by someone in a car, run in the direction opposite the way the car is headed.

Beware of people who approach asking directions; keep a safe distance. Just say "Sony" and keep moving if you are in an unsafe area or simply don't like the guys looks. You have no obligation to be friendly or helpful to strangers on the street.

If you think someone might be following you, speed up. If they speed up also, cross the street in mid-block. If they do also, start running and yelling loud. Create a scene. Make a spectacle of yourself. Get out in the middle of the street and try to wave down a car. Much better to make a fool of yourself in front of a bunch of strangers than to end up in a hospital or morgue.

What to do when you're looking down a gun barrel?

If you are often on the street after dark, carry a second wallet containing a sizable wad of $1.00 bills and old expired credit cards.

If confronted at knife or gunpoint, don't panic. Moving slowly and calmly, pull out the wallet, open it up and show the creep the money. Say, "Here's all my money."

Then toss the wallet to your left side (assuming he is holding the gun or knife in his right hand) and slightly behind him. Then turn and run the other way. As soon as you are a couple of paces away, keep running and start yelling "Police! Police!"

Remember, the longer you hang around with someone pointing a gun at you, the more likely you are to get shot. Your best strategy is to get away just as fast as you can.

When you toss your wallet one way and run the other, the robber has two choices. He can go after the wallet and the money -- which is what he wants in the first place -- or he can go running after some guy who doesn't have a wallet and who is creating a big disturbance and attracting attention.

I can't guarantee you that he won't shoot at you. He is almost certainly a nervous, stupid, drug addict who just might be coked up at the time. But I can guarantee you that this strategy is your best bet, the one that gives you superior odds of survival. If the guy is going to shoot you, better that he should shoot at you while you are disappearing down the street than standing in front of him where he can't fail to put one in your heart or head. If its a knife he has, the danger of attack diminishes geometrically with distance.

If its a gun, the guy is almost certainly a lousy shot. These are not people you find on the firing range getting proficient with their weapon. He may never have fired it before. A pistol is not a highly accurate weapon. It is very effective close up, but the odds of hitting anyone decrease rapidly with distance.

The guy probably really doesn't want to shoot you. To shoot you, he has to make a loud noise that attracts attention, something that he doesn't want. While he is choosing whether to pick up the wallet and get out of there or start shooting at you, you are putting important distance between the two of you.

Few robbers are good shots. And most of them just want your property so they can get more drugs. They don't really want to boost their odds of going to prison for years by shooting you. So give the criminal whatever he asks for wallet, keys, jewelry, credit cards or whatever. Your life and health is more valuable than your possessions. And even a short stay in the hospital costs much more than whatever you're carrying on you.

But give him what he wants in a way that gives you a chance to escape.

Except for your escape, don't make any sudden, unexpected moves. A nervous criminal may think you are reaching for a concealed weapon.

If you don't have that second wallet, do the same thing with the your real wallet. Toss it to one side and while his eyes follow it, turn and run for your life.

If you are confronted with a dangerous situation, cry out for assistance. Yelling "FIRE! FIRE!" instead of "Help!" will generally bring faster attention, particularly if you're in a bad part of town.

Give the criminal whatever he asks for wallet, keys, jewelry, credit cards or whatever. Your life and health is more valuable than your possessions. And even a short stay in the hospital costs much more than whatever you're carrying on you.

But give him what he wants in a way that gives you a chance to escape.

Don't make any sudden, unexpected moves. A nervous criminal may think you are reaching for a concealed weapon.

* Reprinted with permission from "The Center for Smarter Living"www.livesmarter.com. 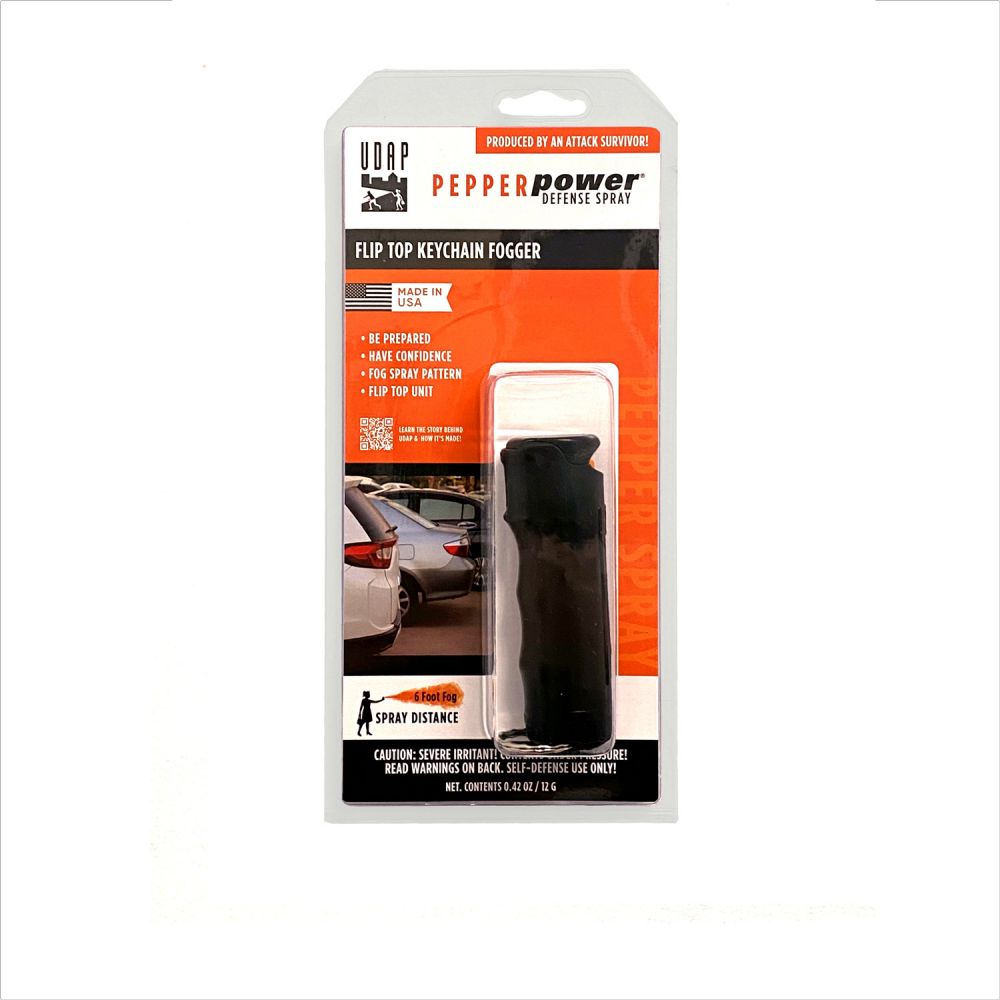 On November 3, 1999 I returned to my apartment in Vancouver, WA and walked in on someone attempting to break into my apartment. The man was about 6' 3" and I'm guessing was over 200 pounds. When he saw me, he came after me. I dropped what I was carrying and reached for my keys, where I always carry a UDAP Key Chain pepper spray. I sprayed the intruder and he immediately dropped to the ground. He didn't move! Luckily a Clark County deputy came on his nightly patrol and I flagged him down. He was quite impressed with the pepper spray. I later found out that the intruder was drunk and had cocaine in his system. I truly believe that little canister of pepper spray saved me that night.


Copyright Notice - All Rights Reserved
No part of this site including all text, illustrations, photographs, pictures, or any other item contained in the pages of the site may be used or reproduced in any manner whatsoever without
written permission except in the case of brief quotations embodied in critical articles and reviews.
Any and all violators will be prosecuted to the full extent of international law.
You have been warned.